10 months into the project, the MinD consortium convened their first annual Symposium at Europe House, London, open to the public. The symposium had the purpose of bringing together researchers, healthcare professionals and designers engaged in improving the life of those living with dementia and to facilitate discussion about current approaches and developments.

After a short introduction by MinD project co-ordinator Professor Kristina Niedderer, the symposium began with the keynote of Professor Cathy Treadaway, who reported on her research and experiences of working with people with dementia through the LAUGH project funded by the AHRC as well as previous research. Prof Treadaway highlighted the need for considering the human aspects of care through focus on sensory aspects, the need for connection and personalised approaches, showing ample examples of the work conducted. The discussion also highlighted the difficulty about qualitative or ‘soft’ evaluation measures which are most appropriate for this kind of work, but which is not always accepted in the medical world and by funders.

The keynote was followed by three short presentations about the MinD project by Dr Isabelle Tournier from Luxembourg University, Professor Vjera Holthoff from Alexianer St Hedwig Krankenhaus Berlin, and Professor Kristina Niedderer, University of Wolverhampton. Dr Tournier introduced the concept of mindfulness with its two major schools of thought, and how it has been applied in the context of dementia care so far, and the idea of using it in the context of the MinD project. Prof Holthoff continued by presenting a summary of the data collection with people with dementia and their carers conducted as part of the first phase of the MinD. This work comprised interviews and innovative visual diaries to collect qualitative information on how people with dementia and their carers feel with regard to self-empowerment and social engagement in their everyday lives. Prof Holthoff also briefly contextualised the work to show the importance of involving people with dementia in primary research on decision making/empowerment related to subjective wellbeing, and not only to making an Action Plan for Dementia Care or Advance Care Planning. The third presentation by Prof Niedderer explained the possibilities of implementing mindfulness through design, including the analytical frameworks developed so far, which will be used to mine the data from Phase 1 for the design development.

The afternoon of the symposium was given over to discussion of a number of issues surrounding the state of dementia care, and our understanding of them, as well as the use, role and potential of design within dementia care. The first part was given over to a design workshop, which explored 4 themes, including: the acceptance of the diagnosis; the change in personal relationships due to and during the progression of dementia; acceptability of care and trust; and using a sense of humour to deal with the situation. For the workshop, participants split into four groups, each discussing one of the themes with regard to the real world scenario, the ideal scenario, and how to use design to move from the first to the second state. The brainstorming around these scenarios led participants into vivid discussions, which they reported back to everyone at the end. 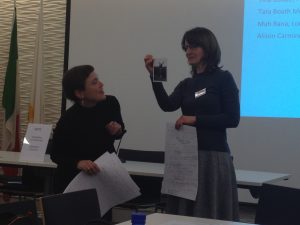 The symposium concluded with a panel discussion around a further two themes concerned with the issue of ‘independence and social integration’ and our perceptions of interaction with persons. The three panel speakers were Prof Katy Treadaway, Prof Vjera Holthoff, and Prof Tom Dening, Nottinghamshire Healthcare NHS Foundation Trust. Unfortunately, the fourth speaker Dr Sara Milne from Alzheimer’s Society, UK, had to cancel her participation at short notice due to unforeseen circumstances. The discussion highlighted various aspects such as deficit oriented language and goal orientated care, and meandered back to the issue of qualitative evaluation measures, which will be pursued jointly by the MinD and the Laugh team in the future.