During the five secondments, March to August 2018, the MinD team has worked on the development and realisation of the two design concepts, the Good Life Kit (WP4) and the Social Engagement Map (WP5).

The Good Life Kit aims to support people with dementia after diagnosis through offering mindful-reflective exercises and information. The diagnosis is usually perceived as a life-changing event, even though the person today is not different from yesterday. The design responds to feelings of uncertainty and depression by people with dementia following their diagnosis and the need to be respected and stay in control of their life.

The GLK seeks to support the person with dementia and their loved ones through providing tools to help take a positive attitude to reflecting on, managing and envisaging their life as well as managing making decisions, relationships and support. The Good Life Kit includes three parts: ‘This is Me’, which allows reminiscing and thinking about the future in a convivial way. ‘Living the Life’, which contains advice and mindful exercises to help with a positive to daily life. ‘You and Me’, which seeks to help people with dementia retain their agency in helping to identify their support network and tasks to be done, and to manage decisions to be made to facilitate the changes in their lives.

The different parts of the GLK were developed throughout the five secondments in an iterative process and were presented to people with dementia in the UK and Spain to explore them hands on to provide feedback on as well as input into the designs to ensure that they are developing in a suitable and relevant way.

The last half year was key to finalising the designs for the three parts of the Good Life Kit, and to get prototypes of the kit produced in four languages – English, German, Dutch and Spanish for the evaluation. Initially, the kit was presented to the PPI group in the UK, to gain feedback and to help develop the formal evaluation, which is now under way. 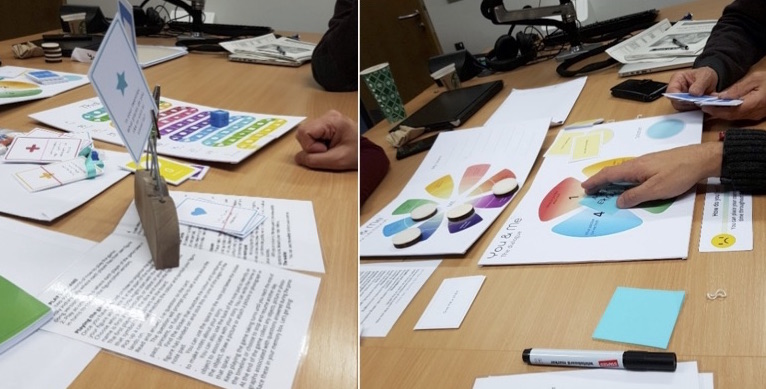 Summarising the design developments throughout year 3, the design concept development made significant progress in defining the ideas of the GLK. The different parts of the GLK concept were continually developed through several iterations in Barcelona, the UK Germany, and Luxembourg (March-July 2018), and were presented to PPI groups in Germany, the UK and Spain in January, June and July. The final concept was agreed in July in Luxembourg, and fine-tuned in September in Germany and The Netherlands, ready for the production of the final prototypes under the supervision of University of Twente in four languages from October-December 2018. This concluded the design development as planned with significant design outcomes, including both the design concepts and prototypes, and the co-design process developed and utilised to achieve them, which we want to highlight further in the following.

Drawing on prior expertise of partners (Gove et al 2017), the co-design process was significantly different from previous approaches, which either offered a specific design task to be accomplished, or where the designs for people with late-stage dementia were created in collaboration with the carers. In the case of the MinD project, people with dementia collaborated in their own right, including the design decision making process to decide on designs they identified as most appropriate, to co-design concept development, to advise on the appropriateness of the designs, to co-develop the prototype and to provide feedback on aesthetic and usability features. The basis for this process of embedding mindfulness thinking in design practice in the form of mindful co-design through PPI – was consolidated in year 2 through a conference paper presented and published at the IASDR conference, November 2017 in Cincinnati, USA (D8.5 for WP4). Further publications with guidance and recommendations on the co-design process and the design outcomes are in progress.