During the five secondments, March to August 2018, the MinD team has worked on the development and realisation of the two design concepts, the Good Life Kit (WP4) and the Social Engagement Map (WP5).

The different aspects of the SEM were developed throughout the five secondments in an iterative process and simulations and an experiential prototype were presented to people with dementia in the UK to explore the SEM hands on to provide feedback on as well as input into the designs to ensure that they are developing in a suitable and relevant way. 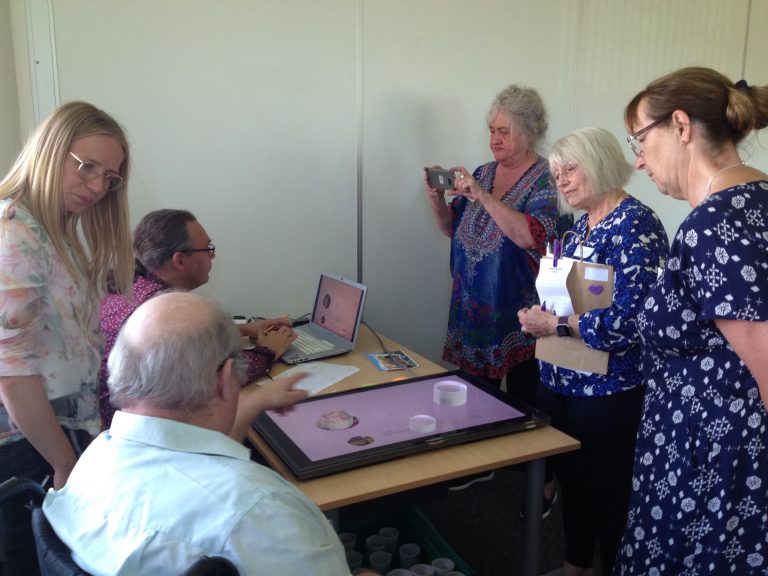 September and October 2018 were focused on completing the detailing of the Social Engagement Map, now renamed as ‘Let’s get together!’. The detailing concerned its visual appearance and usability for the user as well as the detailed technical specification for the final design. Colleagues from design and ICT worked together to work out the final specification for the ‘Let’s get Together!’ design and prototype with input from the PPI sessions conducted with people with lived experience in the UK.

Summarising the design developments throughout year 3, the design concept development made significant progress in defining the ideas of ‘Let’s get Together!’ in the two secondments in March 2018 in the UK and Barcelona. In the UK, early ideas of the SEM were presented to the Nottingham Public and Patient Involvement (PPI) group for input. This was repeated in May 2018 at another UK secondment with a more developed experiential prototype, which participants could try out and manipulate, and on which they offered further feedback. The final design development for ‘Let’s get Together!’ took place throughout September and October 2019, resulting in the complete design concept and technical specification to support the experiential prototype. This concluded the design development as planned with significant design outcomes, including both the design concepts and prototypes, and the co-design process developed and utilised to achieve them, which we want to highlight in the following.

Drawing on prior expertise of partners (Gove et al 2017), the co-design process was significantly different from previous approaches, which either offered a specific design task to be accomplished, or where the designs for people with late-stage dementia were created in collaboration with the carers. In the case of the MinD project, people with dementia collaborated in their own right, including the design decision making process to decide on designs they identified as most appropriate, to co-design concept development, to advise on the appropriateness of the designs, to co-develop the prototype and to provide feedback on aesthetic and usability features. The basis for this process of embedding mindfulness thinking in design practice in the form of mindful co-design through PPI – was consolidated in year 2 through a conference paper presented and published at the IASDR conference, November 2017 in Cincinnati, USA (D8.5 for WP4).

The team has now been invited to publish the development of ‘Let’s get Together!’ as part of a forthcoming book on Design and Dementia that brings together the latest developments in the field. The chapter will discuss the design concept and its development with and through PPI involvement.